To fully appreciate home land geography its important to spend some time with a good map which shows old place names. 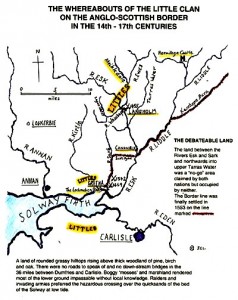 Edward Little “of Meikledale”, was founder of the clan and a descendant of Anglo-Norman Richard Lytle, In 1296-97 Edward was associated as a guerrilla fighter with Sir William Wallace.

In 1426 Simon ‘LITILL’ became the lst Laird of Meikledale having been granted tenure of some Ewesdale lands by James I, King of Scots.

Other Littles who had a less warlike disposition found their vocation as monks in Abbeys and Convents.

The Littles of Liberton in Edinburgh c1500 are a branch of the Border clan and Clement, 2nd of Liberton was founder of the University of Edinburgh Library.  His brother William Litil, 3rd of Liberton, was twice Provost of Edinburgh in the post-Reformation period

The Little Clan of the Scottish West March supported the Stuart Kings of Scots through five reigns until 1530 when James V, under pressure from the English Court, tricked thirty two Armstrongs, Elliots, Littles, Irvings into a parley and hanged them out of hand.

Its a reasonable assumption that our Little ancestors were closely involved one way or another with the socio-political posturing of the time. In the Anglo-Scottish Border Wars of 1296-1603, the Little’s were a fighting clan of the West March, living close up to the border on the Scottish side.  Constantly raiding and reiving. The land of Clan Little was within the West March. March was the term used for the Anglo-Scottish border during the late medieval and early modern eras. They were conceived in a treaty between Henry III of England and Alexander III of Scotland in 1249 as an attempt to control the Anglo-Scottish border by providing a buffer zone. On both sides of the border there were the West March, the Middle March and the East March.  In the late 13th century Edward I of England appointed the first Lord Warden of the Marches, who were tasked with overseeing these regions and keeping their monarch’s domain secure; when it was in their interests they would encourage cross-border raiding, or even full-scale war. For centuries the Marches on either side of the boundary were areas of mixed allegiances, where families or clans switched which nation or side they supported as suited their family interests at that time, and lawlessness abounded.   During this era, the Border Reivers were raiders that attacked local residents. There were both English and Scottish clans in these groups, however their they would attack regardless of nationality. Local farmers would often need to make payments to the various clans as a form of protection money to ensure they are not attacked. These agreements were call “Black mal”, where mal was an Old Norse word meaning agreement. The word blackmail entered the English language in 1530 as a result. The Wardens of the Marches on either side of the border were entrusted with the difficult task of keeping the peace and punishing wrongdoers; the Scottish and English Wardens would meet to co-ordinate their efforts against free-lance reivers.  By the close of the 16th Century they had earned a reputation as the finest light cavalry in Europe.

In 1603 King James I of Great Britain (a.k.a. King James VI) of Scotland was determined to put down the continuing lawlessness on both sides of the Border. His wishes were carried through with sword, noose and torch until hardly a building stood in the whole of Eskdale and Liddlesdale.  Chiefs were hanged and those who survived were forced to quit their lands.

Simon was chief of the Little clan at the end of the Border Wars. His son Thomas, was succeeded by David, the last Laird of Meikledale and last of the chiefs. The direct male line in descent from David terminates with 18th Century Simon of Nittyholm who had seven daughters and no sons.

The clan began to scatter in the early 17th Century fleeing from persecution, poverty and overcrowding to the Ulster Plantations. Many moved to English Cumberland, crossed the oceans to North America, Australia and New Zealand.